Confusion about Ohms Law and the Direction that Electricity Flows In.

In electronics the basic equation is Ohms Law

PD or p.d. standing for potential difference. (the voltage measured between two points in an electric circuit)

EMF standing for, electro motive force, but considered not to be a force although who knows what goes on in the mind.

As you see it's the voltage where you get the problem.

At the moment, while  a 1.5 volt battery, can be thought of as having a potential difference between each end and an internal resistance, most of the time, just think of it as a 1.5 V battery.

Unfortunately when electricity was being discovered it was decided that the flow was from positive + to negative - and this is called conventional current flow. I would say that if you are going to manage to understand some electrical components properly, then best just accept that electricity is a flow of electrons going from negative to positive and that the arrows on diodes and transistors are all the wrong way round.

Trying to hold the flow of holes in your head along with everything else, well you know how it is with holes in the head. 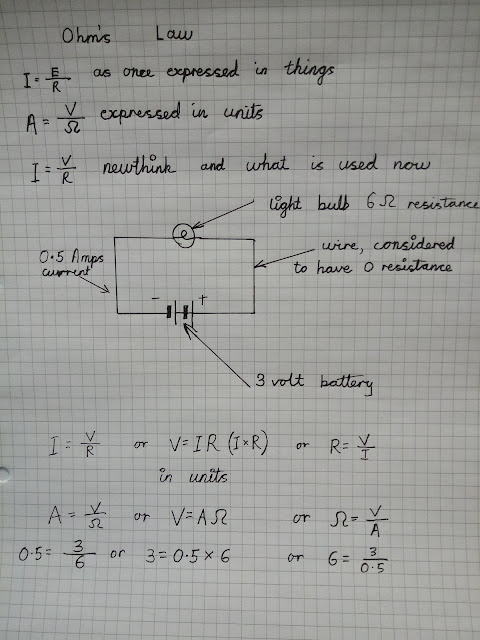 V never goes at the bottom.

Getting the battery symbol the right way round can be remembered by breaking the long line in the symbol in half to form the + symbol.

The direction electricity flows in was discovered by Edison's assistant Hammer in 1880. This is a complicated business (the discovery that is) Discovered before by English scientist Frederick Guthrie in 1873.

But the Hammer Edison one is easy to understand and involves putting another  bit of metal in a light bulb with a wire leading outside the light bulb. 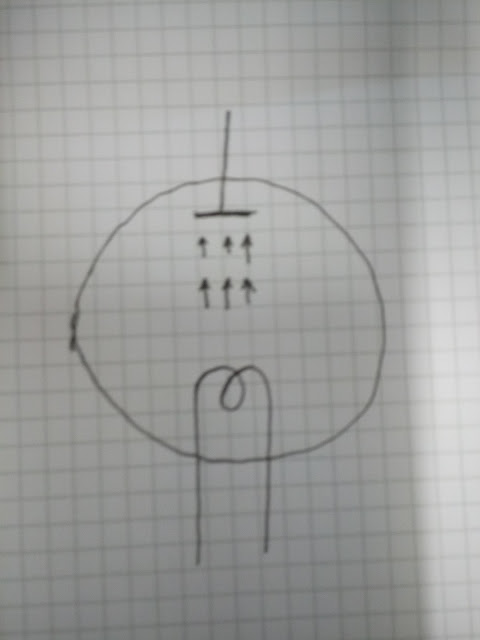 The electrons excited by the heat of the element will flow toward the extra bit of metal if a circuit is completed. They won't flow the other way, it's like a one way street, and called a diode.

Email ThisBlogThis!Share to TwitterShare to FacebookShare to Pinterest
Labels: Direction that Electricity Flows In, Ohms Law