Death by bad maths and not understanding science.

Back around the end of WW2 there was a saying something along the lines of:- That WW2 and all subsequent wars would be won by the side that had the best German scientists. I have just watched a situation (Stopping the Oxford AstraZeneca jab because they couldn’t work out the risk equation relating to morality and possible side effects) where German politicians killed a lot of German people because either their maths was bad, they couldn't understand scientists, well I don't really know, but I am going to work at it here like a hole in a tooth.

Picture from the Wikipedia article

Here on the internet you can't do this, so I had to find another way to explain this business of there being some things you can't understand because you are human.

1 Light travels at the speed of light

2 Time doesn't occur for light, photons or light waves do not experience time because they are traveling at the speed of light.

3 Light either observed as waves or particles can be polarised and this state of polarisation can be observed.

It therefore follows that when light is polarised it has always been polarised because it doesn't experience time.

So the light that travelled from the sun and passed through your polaroid sunglasses was polarised 8 minutes and 20 seconds before it reached your sunglasses i.e. when it left the sun.

You can't understand this because you are human, or perhaps you can, psychologists often call this the Dunning–Kruger effect.

I made a stupid maths mistake yesterday, I saw one of those daft things on Facebook 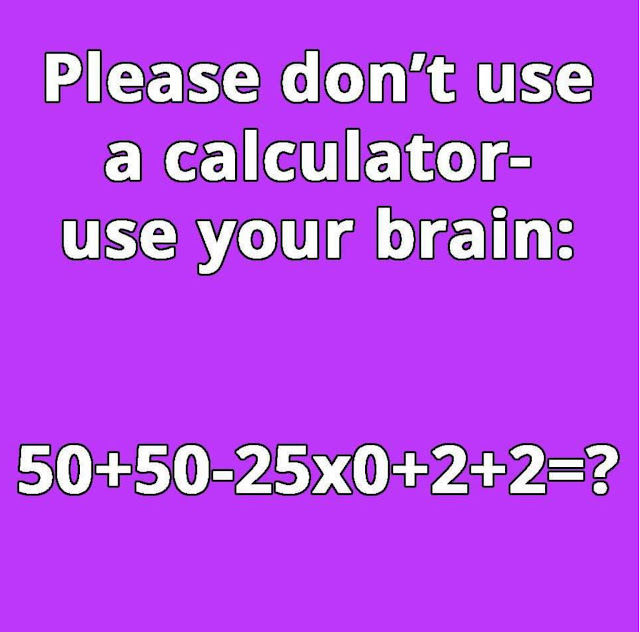 What fascinated me was the MS Windows 10 calculator made the same stupid mistake that I did, failed to apply the BODMAS rule and came up with 4 instead of 104. 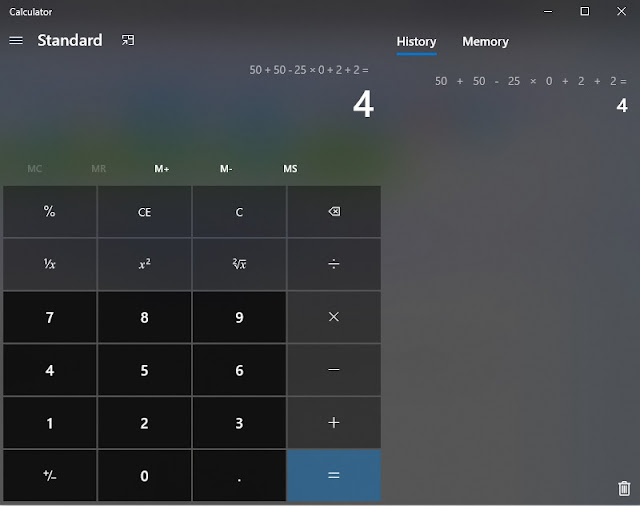 The calculator on my android phone came up with the right answer.

I guess having been a mechanic of sorts, on and off and for years part of my mind was expecting an answer around 100, but I have been doing a lot of humanities reading recently, so some part of my mind flipped and did the whole sum just from left to right, as though I was reading a story.

When the pandemic first started I became aware of an issue between the two types of mind, politicians and journalists tend to have a humanities background. With the pandemic the people who hold the information are the scientists who mostly don't. Here in the UK and now in Europe I'm coming to the conclusion that a breakdown in communication between these two groups of academics is killing as many people as the virus. There is an aside to this which is to do with mathematics and how the part of the brain that tends towards panic and stress, seems to also so be to do with mathematics. So a perfectly ordinary mathematical question if loaded in terms of the figures that relate to virus mortality, suddenly becomes impossible for ordinary intelligent people.

Most of my family and a lot of my friends have scientific backgrounds and I tried the simple question, what is 20% of 20% of 25, first loaded with pandemic mortality figures and then as an ordinary question, I can only say, try this on your friends.

My coronavirus mental mathematical picture looks something like this:-

Looking at todays figures:-  "The UK has recorded a further 4802 coronavirus cases and 101 deaths in the last 24-hour period, government data shows." you don't have to be a genius to approximate 100 in 5,000 or 1 in 50 which is a lot better than 1 in 30. Most likely both lockdown and vaccines are bringing the overall case rate down and the vaccine is bringing the mortality rate compared to the positive test rate down. so your chances of dying of coronavirus are nearly half what they were before the vaccine rollout and getting better all the time. Best of all we have less than 10% of new daily cases compared to the peak. so what is 10% of 50%?

I don't really know how to put this across to the important people influencing how the pandemic is killing people. These important people are mostly journalists and politicians. I think there will also be some lawyers involved, but mostly in The fallout and the blame game afterwards. The difficulty is to try to get them to understand some very simple sums now and save some lives. so I am aiming this mostly at people who did history art and music and excelled in English but just got through with their maths. The people who did the maths and sciences I think just make the assumption that when most people look at a simple sum their mind comes up immediately with some sort of approximation of the answer.

Without vaccines I suppose a reasonable guess is the pandemic would have eventually killed about 1 in 50 people and made about another 1 in 50 very ill, Whether the 1 in a 1,000,000 chance of a person dying of a blood clot because they have had the vaccine can ever be calculated is difficult to say. What is certain is that a large number of people who didn't get the vaccine because of politicians and journalists, not being able to understand the scientists, do the sums or whatever that was all about, well they will die.

For anyone having difficulty understanding the report here is a simple explanation.

1 There is very little difference in effectiveness between the Pfizer and the Oxford jab.

2 This data is about over 80s 2 weeks after their first jab.

I should stress here that with every day that passes after the vaccination the situation improves.

A further update 21.03.2021 when I first posted this I intended to link it to several places within social media and the first one was Quantum Physics News Facebook group

1,000 hits here over 150 comments there after 2 days was enough to manage for the time being.

Further update 30th March. 234 Germans died of coronavirus today Germany reported 13,110 new cases and the German Government suspended use of the Oxford-AstraZeneca vaccine in the under-60s over concerns about rare blood clots. There have been 31 unusual blood clots among the 2.7 million vaccine shots given in Germany. It's not really possible to calculate if the number of rare blood clots would have been larger or smaller if people hadn't had the vaccine'

This post is primarily about understanding and communication between scientists and everyone else, especially politicians and the media. Highlighted with science that scientists can't understand, although some claimed to understand something.

For the science in this I could add what happens if if you polarize light and it travels a distance and you polarize again. Obviously the light itself is not experiencing time but something is being done sequentially in a place that has no time. This would seem to suggest that events happening sequentially are different two events happening within the dimension of time.

David Dodd, the chairman of potential vaccine maker GeoVax, has said reports of blood clotting linked to the Johnson & Johnson vaccine should be "thoroughly investigated".

Speaking to Sky News, he said the technology used in the J&J and Oxford-AstraZeneca vaccines - which use an adenovirus - does have some relationship with blood clotting.

"We should be concerned but we should put it in perspective," he said, pointing out there have been almost seven million J&J doses administered in the US and six reported clots.

He added those who developed clots were women of reproductive age, so it could be they were taking oral contraceptives which already carry a risk of clotting.

Death by bad maths and not understanding science.

Back around the end of WW2 there was a saying something along the lines of:- That WW2 and all subsequent wars would be won by the side that ...